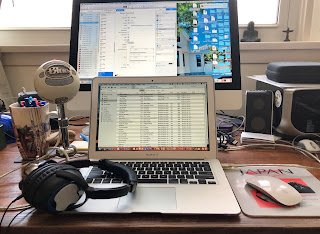 The Scarborough Dude gets too high to podcast, but does anyway, and then tries to explain it all.

Music:
Essence of Now - It's a Beautiful Day - Marrying Maiden
Everything In It's Right Place - Radiohead - Kid A
Posted by Scarborough Dude at Friday, January 19, 2018

Re: Cannonball Adderley in the background: actually, to me it sounds like you and Mr. Adderley are pretty much side by side at centre stage. I listened on a couple of different setups and got the same result. Your call as to whether to remix, of course, but if it were me...

Yes, as soon as I played it back in GarageBand I realized the music was much too LOUD. IF someone had paid money I would offer a FULL REFUND, or promised to redo it, and maybe even send out FREE T-shirts. IF the music was on a separate track in GarageBand or Audacity, I probably would have gone back and redone it, as it's a simple matter

I am sorry you wasted time trying to get a better listening experience, as I do appreciate having you as a listener, but I do find it funny having you tell me it's my call. We podcasters can be a surly lot, and the suggestion 'but if it were me...' could raise hackles, but I know you are coming at this as a musician and a sound guy, so I'll just let that one go with a smile...

That said, I really am sorry to all my listeners for putting out something I could have done better, but then I should say that for each and every episode.

Ah, I never clued into the fact that you were doing the voice and bkgrnd music live into one track.

Yeah, I mean, who cares if it were me? I'm not even sure I do. Anyway, it's not as though you were completely drowned out. This is just one clip out of how many?

Exactly. I don't tend to make these mistakes with my handy held held faithful old Olympus, but have had issues working with my new 'look at all these great options and features' recording software, including the Gapage episode done last night and the one before. Old dog, new tricks...